After 3 short years of art school it was finally time for the degree show. The theme I wanted to explore had to do with a pastime of mine: archery. I wanted to examine the similarities between archery, drawing and painting. In particular, I wanted to explore the intense focus and concentration I experience during both activities. Whilst I do not ascribe any supernatural or meditational qualities to either of these activities, there is a calmness in their focus and a purposefulness in the concentration.

When I first approached the subject, I didn’t come up with much immediate visual output. I had ideas, but I didn’t think that I would be able to realise most of them; especially on my student budget. I had already done some paintings portraying archers, although it was not always obvious that they were archers. However, the paintings alone didn’t explore the idea of focus and concentration to my satisfaction. So it was time to get out my sporting equipment and see what I could do with it.

Getting to know the subject 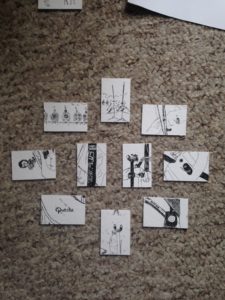 I took the time to get to know all the materials I was so familiar with in a different light. Rather than checking the bow’s string for the right amount of twists, I now examined the textures it created and its elasticity; or the lack thereof. I learned to look for the reflections in the metal points of my arrows and to examine the carbon fibre patterns on my bow’s limbs. It was rather satisfying to dive into another aspect of a sport I love and to immerse myself completely in the visual appeal of it.

Next, I went to an archery competition in Scotland, this time equipped with my matchbox full of paper (plus additionals) and my rapidograph pen (size 0.25). Drawing plein air, I was searching for the feelings and images that encapsulated the sense of competition for me: the relaxed, amiable atmosphere and the concentration and focus. The patient, if sometimes drawn out passing of time during and between ends. After about 60 drawings, and 6 hours of competition, I returned home and fiddled with possible compositions and formats. Fairly quickly I decided on which drawings to use and the formats in which I was going to arrange them. What remained to do now was to cut the passepartouts. A fiddly task, as the images were about 3.5 x 4.5 cm each and each window had to fit perfectly. 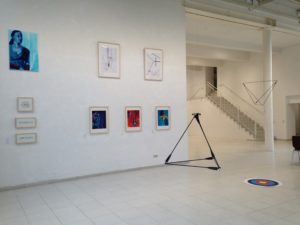 Despite the drawings, I felt that I needed to explore my chosen subject further. I kept a notebook with some wilder ideas and concepts and ended up trying to tie one of them in with my already extant drawings and paintings. The process of drawing is an attentive and focused activity in and of itself, which suited my intentions rather well. But it was not the only way that I wanted to explore the links between archery and my creative process. I looked at the mathematical theory, such as the Fibonacci sequence and the Golden Ratio in combination with my notes. Most of these musings ended up getting shelved for a potential later use. But I ended up exploring the space through which the visitors would move and how I could potentially disrupt them or create an appealing moment of focused stillness.

This was easily achieved for myself, as I was an archer and also created the pieces. Having been there for the creation of the thought process meant that I was invested, not just emotionally but also intellectually. I chose to create hanging elements out of arrows by creating a pyramid of arrows that would slowly revolve around itself. The ceiling of the exhibition hall was 6m high and provided ample opportunity for suspended elements. Time constraints meant that I ended up with only two suspended elements, one suspended by a corner, and one suspended by the middle of an arrow.

The planning and creation took about 6 months, during which our group of graduants had to allocate the space in the hall between ourselves. All planning, however extensive, was regularly overturned as we were faced by the realities of setting up. Paintings and works were shifted, replaced, taken out and added as we helped each other setting up in a rather large space. A part of the project was also a communal work, which took about 2 days of setting up (and which I will talk about in an upcoming blog post). All in all, satisfaction coupled with exhaustion followed the opening ceremony, which was followed by two weeks of exhibition. A first step in my exploration of the theme of focus and attention.